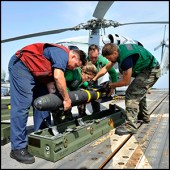 Oops. Somebody accidentally sent a Hellfire missile to Cuba, and Cuba doesnt want to give it back. According to an article (subscription required) in the Wall Street Journal, a Hellfire missile that was legally exported by Lockheed Martin to Rota, Spainfor NATO exercises, got sent by a freight forwarder (or spy or crook) to Cuba after the exercises were over instead of back to Lockheed Martin in Florida where it was supposed to go. Apparently the freight forwarder in Madrid, which was supposed to put the missile on a truck headed to Frankfurt where the missile would catch a flight back to Florida put the missile on a truck headed to Charles de Gaulle outside Paris where Air France obligingly put the missile on a flight to Cuba. And now theres hellfire to pay.

A State Department official interviewed by the Journal said that many of the 1500 voluntary disclosures filed each year involved mis-shipments, although the precise number is not tracked. The official added:

Mis-shipments happen all the time because of the amount and volume of the defense trade.

The kicker in all this, however, is this:

If it turns out that the Hellfire was lost because of human error, the criminal probe would end and the State Department would have to determine whether to pursue a settlement with Lockheed Martin over the incident.

This is, of course, completely ridiculous. Granted that there is strict liabilitybythe exporter for export violations, that does not mean (in any rational universe outside DC) that Lockheed has committed a violation in the first place if someone other than Lockheed, for whatever reason and without the fault of knowledge of Lockheed, put the defense article on the wrong flight. And particularly where this wasdone by Air France, no less, which regularly sends ordinary baggage bound for one place to Tahiti or some other distant former French colony. And let me remind DDTC that this item would have gone out undera DSP-73 on which every single freight forwarder and intermediate consignee who touched the missile was disclosed to and approved by DDTC. Maybe DDTC should be fined for approving the freight forwarder or intermediate consignee responsible for this screw-up.

(No republication, syndication or use permitted without my consent.)

If the error was committed by or known to (or should have been known by) the freight forwarder, but no corrective action was taken, then the forwarder is liable and Lockheed is vicariously liable as the principal of the forwarder. Forwarders are not fungible: competence and attention to detail are far more important than price when dealing with controlled items, especially one which has the defense equities (as DTSA would say) of a Hellfire anti-armour missile. Hellfire missiles are one of the precise guided munitions which give US forces an advantage in the field over Soviet/Russian/Chinese equipped militaries and terrorists.

Clif: Did you mean the missile was sent by Lockheed Martin to Spain for the exercises? It reads Cuba.

The third sentence of the post states legally exported by Lockheed Martin to Cuba for NATO exercises in Rota, Spain, but that doesnt seem to be the case. The article implies it went straight from MCO to Rota.

Id also note that the statement about pursuing a settlement are the reporters words, not a quote. Without knowing exactly what was told to them, its possible their sources werent as absurd as that statement.

On a more positive note, a training Hellfire doesnt have an operational seeker or the fusing system, so it could have been worse.