This Kat would like to thank his solicitor colleague Tristan Sherlikerfor this interesting copyright mewsing.

In a real-world fairytale story this week, the discovery was announced of a previously unpublished work by beloved mycologist (also children’s author) Beatrix Potter, 150 years after her birth. 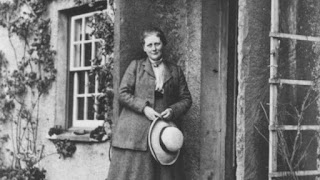 Would Beatrix have thought of Merpel as a well-behaved cat?The newly uncovered story, The Tale of Kitty-in-Boots, was described by the author as “a well-behaved prime black Kitty cat, who leads rather a double life”. It was discovered in the V&A Archives (where the majority of Potters papers reside) in 2015 by an amazingly fortunate editor at publisher Penguin Random House Childrens. Publication is anticipated in 2016.

Happily for Kat enthusiasts, there is an interesting IP story, which was first raised in our office when we wondered: Who owns the copyright, and why has it not expired?

A very lucky findIn fact the luck of this find in 2015 is quite striking. Readers with appropriate pocket change, will already know that Beatrix Potter died in 1943 meaning copyright in her works expired at the end of 2013, and they came into the public domain (at least in Europe) just a couple of years ago on 1 January 2014. So while the archive at Project Gutenberg gives free access to all her other publications, why will Kitty remain protected, for the benefit of the publisher?

The answer lies in a (nearly forgotten) schedule to the Copyright, Designs and Patents Act 1988. Schedule 1 to that 1988 Act provides as follows (we can ignore the specific provisions about printed paper hangings and machine-made lace):

3. The new copyright provisions apply in relation to things existing at commencement as they apply in relation to things coming into existence after commencement, subject to any express provision to the contrary. []12.(1) The following provisions have effect with respect to the duration of copyright in existing works.[](4) Copyright in the following descriptions of work continues to subsist until the end of the period of 50 years from the end of the calendar year in which the new copyright provisions come into force

(a) literary, dramatic and musical works of which the author has died and in relation to which none of the acts mentioned in paragraphs (a) to (e) of the proviso to section 2(3) of the 1956 Act has been done;[]

The cross-reference into the 1956 Act referred to isnt much fun: The Copyright Act 1956 is pretty poorly drafted. Happily we can take the point from just looking at the following provisos to section 2(3), to find (added emphasis) that the publication of a work is one of those provisos:2.(3)Subject to the last preceding subsection, copyright subsisting in a work by virtue of this section shall continue to subsist until the end of the period of fifty years from the end of the calendar year in which the author died, and shall then expire:

Provided that if before the death of the author none of the following acts had been done, that is to say,

(a)the publication of the work,

(b)the performance of the work in public,

(c)the offer for sale to the public of records of the work, and

(d)the broadcasting of the work,the copyright shall continue to subsist until the end of the period of fifty years from the end of the calendar year which includes the earliest occasion on which one of those acts is done.A 26 year bonusKitty-in-Boots fulfils all the criteria for extended copyright protection: It existed at the date of commencement of the 1988 Act; it is a literary work; was unpublished before the death of the author; and the author died in the right timeframe for the work to be eligible (before the 1988 Act came into force).

But if it was previously unknown, who owns it? Well, Wikipedia tells us that copyright in Potters stories was left to her publisher, and ended up with the Penguin Group. The 1956 Act provides (38) that such a bequest would be deemed to include unpublished works; so Penguin would appear to be the copyright owner.

Mixed workAs Warner-Chappell was reminded to its cost recently, one should not lose sight of the fact that the words may be dealt with differently to other elements that make up a work of mixed copyright. The publication itself will be a work of mixed authorship while Beatrix Potter’s famous illustrations are (were?) her own, the new publication will be illustrated by Quentin Blake and of course the typesetting arrangements will attract their own rights. So copyright in this book itself will continue long after the 2039 cut-off period. Speculating, the following factors may also complicate matters:

Beatrix Potter did complete at least one illustration for Kitty-in-Boots;A second, incomplete sketch of the villain (Mr Tod) was found with the papers; andShe also began to lay out the manuscript, which might influence or be incorporated into the final typographical arrangement.

So what?Appreciating this is arcane, it is perhaps not as unusual as all that. The story is a good reminder that that some IP rights especially copyright last a long time, and it is the norm, not the exception, that they will change during the lifetime of their existence. The 1988 Act has been amended at least 12 times since it came into force, and even last year exceptions have been called into question. So checking an authors date of death and adding 70 years isnt always reliable.