None of us is immune fromthe Streisand Effect. Not even employers.

Honey, it can happen to any of us!

A real estate firm in Dallas sued its ex-bookkeeper, Jacqueline, for embezzling approximately $400,000 over a four-year period by writing checks to phony vendors and all the usual tricks. She generally denied the allegations, and apparently the parties didnt do much discovery, so they went to trial without knowing what the other side would say.

The CEO, Jim, got up on the stand and patiently went over the books, explaining to the judge all the dishonestthings that Jacqueline had supposedly done. It didnt look good for Jacqueline.

Jim was called back as a rebuttal witness. Well shes ugly! he said.*

*Not the actual trial testimony. Jim denied the relationship. 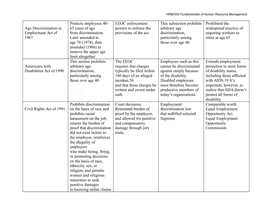 The judge believed Jacqueline, finding in her favor on all issues.

OK. Bad idea for Jim to have sued Jacqueline in the first place, if thats what was really going on. Bad day in court for Jim and his attorney. And a terrible, horrible, no-good, really bad day forJims wife. But then, stuff happens. The real question is, How do we move on?

I know! Ask the judge to put his findings in writing!

So Jim did, and the judge put in writing his rulingthat Jim had a four-year sexual relationship with Jacqueline, and that Jim told Jacqueline to pay herself through company funds so that Jims wife wouldnt find out.

I know! Appeal the judges decision so theres a written opinion from a highercourt picked up by Law360and read by alert employment lawyers and bloggers everywhere telling the worldthat Jim was not only cheating on his wife but also procuring for himself.Thats the way to put this thing behind us!

Well, Jim really did that. He claimed that he was blindsided at trial by Jacquelines testimony because she hadnt disclosed before trial that she was going to claim an affair. The Texas Court of Appeals disagreed, saying that shed said in her disclosures that she was going to claim she had permission to make the expenditures, which was enough to put Jim on notice. (Especially if he really was having sex with Jacqueline anyway!) In addition, the court said, because the case was tried before a judge instead of a jury, the judge was allowed to decide who was more credible and whose evidence he believed. (In case you forgot: He believed Jacquelines.)

So, dear employers, next time you really want to go after a former employeeand your lawyer tells you no, please do listen.

*We have resuscitatedour healthcare industry publication, Preventive Medicine, as of this past Monday! The current edition features anarticle by Elizabeth Joiner on pregnancy accommodation, and also has EEOC statistical charts that look strangelylike EKGs (coincidence?), and quick takes on recent developments that will be of interest to healthcare employers. Well be publishing Preventive Medicine on a quarterly basis from now on.