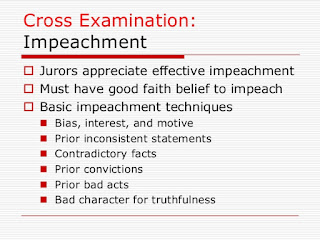 P was sucker punched at a bar. He sues D for throwing the punch but D denies doing so. At trial, P calls W1 who testifies that immediately after the punch, bystander, X screamed, D just socked P. In response, D calls W2 to testify that minutes later X said that somebody else hit P.

Were digging further into FRE 806, which deals with impeaching a hearsay declarant. This rule comes into play after the admission of a hearsay statement or after admission of a non-hearsay statement of an 802(d)(2)(C), (D), or (E) declarant. Here, Xs first statement, D just socked P, is assumed to come in as an excited utterance. X is a hearsay declarant because W1 is conveying what X allegedly said out of court. As such, it is open season against Xs credibility as if he were testifying at trial.

Note that the advisory-committee notes to FRE 806 point to differences in court opinions where the prior inconsistent statements occurred subsequent to the first hearsay statement admitted. The rule seems to favor admitting the subsequent statement consistent with the outcome in the above fact pattern.

See Problem 23 where we discussed impeaching a hearsay declarant with a prior tax-fraud conviction (a crimen falsi).